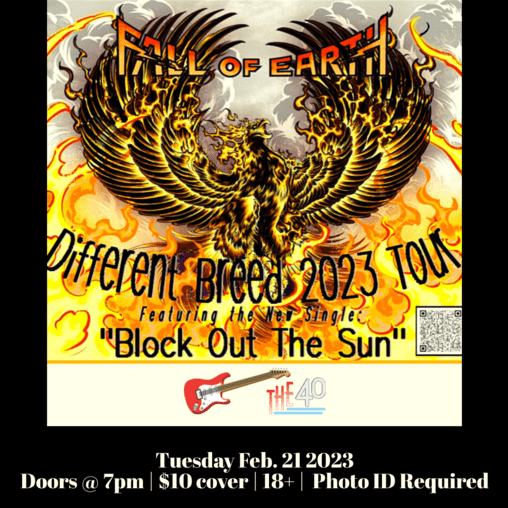 #40FAM We are SUPER EXCITED TO WELCOME TO OUR STAGE...

Fall of Earth (FOE) is a band in a different genre that has been called Hybrid Hard Rock/Metal. With each member
of the band being influenced by a wide variety of Hard Rock and Metal sub-genres, the music they have created
stretches boundaries and results in a unique sound all their own. Each song is crafted with meaningful lyrics written
to tell stories of life, both tragic and inspiring. Talented and passionate with a flair for owning the stage, they have
rapidly developed a reputation as “can’t miss” live performers. There are Big Things ahead for Fall Of Earth!

Fall Of Earth is led by the growls, screams and soaring clean vocals of Frontman Alex Rye of Inuit descent, who
captivates every audience member with his energy and showmanship. The flying fingers of Axe Slinger Brody
Bauer produce a dizzying array of sounds that regularly elicits screams of rapture from the audience. The
progressive and primal low end is provided by bass wielder Aaron Winklmeier, as he muscles his way (both literally
and figuratively) around the stage. Drummer Brendan Meilleur brings the elite combination of high energy drum
fills and expressive grooves, all while contributing vocal harmonies. Collectively, the members of Fall Of Earth
possess the highest levels of musicianship while never forgetting to put on the exceptional live show the band has
become known for delivering. It’s more than a rock show… it’s an experience!

2023 promises to be a big year for FOE as they will be releasing their sophomore Album titled “From The Ashes”
in March featuring 9 tracks that will definitely hook the listeners. Prior to the Album release, FOE will be releasing
in early January their first single “Block Out The Sun” to commercial radio, supported by a production video. In
February, the band will again be releasing another single (TBD) from the new Album. With the new album in hand,
FOE will be hitting the road hard in 2023 to share their music with heavy music lovers across Canada and
Internationally.

Fall Of Earth is a play on words that reflects their core belief that the world is experiencing a multitude of issues
including climate change, war, and mass extinctions that is leading us all to a darker place as a society. The band
hopes to use the power of music to help the world recover.
https://linktr.ee/FallofEarth