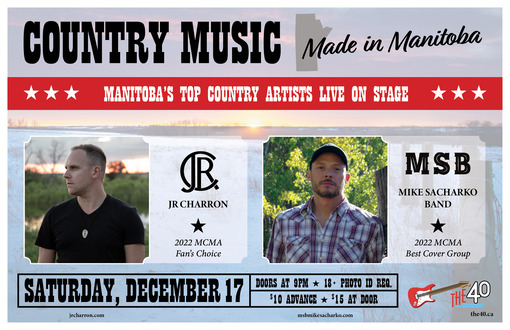 A small-town boy with a big voice, JR Charron continues to break down barriers by combining old & new school country influences with his powerfully gritty rock vocals.
JR’s debut EP Impression (2020) made waves with “Song for You”, which landed in the Top 10 on the Canadian Indie Country Charts, followed by his second single, “Broke”, charting in the Top 50.
An established writer, lyricist, and performer, JR has played stages across North America, found success on CBC Searchlight with his self-released single, “This Train”, and, alongside his former band Jump The Clutch, landed in the Top 15 on iTunes country music charts with “Day Worth Living For”.
Most recently, JR celebrated FOUR Manitoba Country Music Nominations; winning the award for Fan's Choice - and a showcase performance at the Canadian Country Music Awards, all while gearing up for the release of “Who You’re Gonna Be”; his heartfelt & emotionally driven new single that shares a softer side of the family man.
With a commanding voice and high-intensity live show, JR continues to captivate audiences and engage new listeners with no plan of slowing down anytime soon.
* * * * *
Brandon Manitoba's own Mike Sacharko has been bringing the party to Western Canadian audiences for over 20 years.
No stranger to the show, Mike has shared the stage with many prestigious recording artists such as Little Texas, Aaron Pritchette, Charlie Major, and Chad Brownlee to name a few.
Mike is known for his stellar vocal ability, entertaining crowd interaction, and rockin' lead guitar.
The Mike Sacharko Band keeps the dance floor bouncing all night long with current and classic rock and country dance floor hits from Keith Urban, Brothers Osbourne, Steve Earle, Merle Haggard, Johnny Cash and many more.
Most Recently, The Mike Sacharko band was nominated for - and took home a Manitoba Country Music Award for cover band of the year 2022.
MSB is chock-full of talented Manitoba players and is ready to bring his party to The 40 stage!